I Think God Can Explain

Raskolnikov and the Leap of Faith: 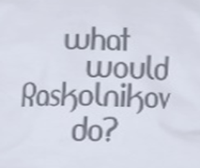 What can God explain to a man so impoverished, dishevelled, and nihilistic that he turns to murder?
Is a man deemed criminally insane not susceptible to severe emotional weakness to the extent that the only comforting explanation, and apparent forgiveness, is indeed that which comes from God?

Indeed if we look at the 'treatment' of suffering addicts in America for example, it very much seems to be a case of God first, material treatment later or not at all: Religion is frequently used by 'therapists' as a means of overcoming addictions arguably brought about by nihilisms, or vice versa; to the extent that religion dominates the addiction treatment 'marketplace'. God, or at least the notion of God transcends the emotional vulnerabilities of the sufferer. It becomes a marketable 'product'.

Does man at his weakest point turn to the most desperate of explanations for his state of crisis, precisely because his mind has wondered far from any rational bounds? In this regard, the character of Raskolnikov, the murderer, in Crime and Punishment first of all illuminates himself as to the reality of the absurd world; his reduction to impoverishment*, crawling into a ball on his tattered sofa, in his squalid low ceilinged claustrophobic Saint Petersburg apartment. (Note the theme of reduction: the room is small, the sofa even smaller, Raskolnikov even smaller than the sofa). A "louse" in the social order.


This realisation of absurdity means he turns to murder, without distinction of worldly consequence. In this sense his 'realisation' and 'enlightenment' lead him to an act which precipitates delirium. But does this not mean the act itself is the act of a deluded man, as I have pointed out, his realisation of absurdity would appear to be a process of enlightenment. Criminal proceedings would however, through the worldly trend of self-satisfactory/socially satisfactory ignorance (as they do indeed in the novel, i.e. 'monomania'), effectively dictate that:


1) Nihilistic Beliefs/Enlightenment = delusion (and surely criminal insanity?
2) Absurdism (i.e. an absurd act, i.e. a random murder) = Delusion (as above).
3) The overall marketable 'product' of justice = An act committed by a criminally insane person.

But then enlightenment is reversed: After his 'barbarous act' our assailant turns to God to answer his painful woes and sorrows: This pain and discomfort with the world are pre-existant of the murder (this is important to recognise)... but they do also ultimately pre-empt the murder. If the man had somehow turned to God as a response to his initial skepticism of the world this might be deemed an equally delusional response, indeed, to him, an axiomatic, rationally deductible, delusional response. Rational deduction led the man to nihilistic torture. Thus the 'product' of God; of repose for our assailant, is borne out of all that is criminal, deluded, and criminally deluded in him.

And so with the input of Sonia, effectively providing the role of 'therapist', turning to God becomes the 'logical' response to the end of the chain of delusion. God is the comforting protection from nihilistic pain and torment, arising not from the pre-existing emotional struggle, but from the psychological consequence of the act (i.e. the murder), the PASSIONATE expression of total FREEDOM; the REVOLT against this consumptive torment.

But what about those people who turn neither to Nihilism or to God, where are they on the road?

Life,
it continues as does a bicycle,
Being pedalled by someone.

All the the way along,
the wheels slip and slide underneath;
the handlebars always threaten to crash sideways into the pavement;

The panic each time they tilt,
resets and recycles,
all the way along the road.

Until,
one day you fall;
and the bicycle skids away.

...They keep on peddling, longer than anyone else, surrendering to nothing; they are not impoverished Raskolnikov's, who get off the bike, and cover themselves in rags by the roadside, and they have not reduced themselves to anything other than their mysterious directional conviction, whilst the Raskolnikov's of this world, at once a religious and nihilistic zealot, cannot comprehend this sense of direction, neither can the cyclists foresee their directionlessness; we are presented with an interpersonal security dilemma:

"In response to this, Raskolnikov slowly sank back on his pillow, threw his arms behind his head and began to look at the ceiling."